Autogenesis is a type of interactive project between the viewer and the reflections of the artist’s imaginations. In this installation, the viewer interacts with a modeled system of the artist’s mind and experiences a range of variations among the three situations (order, complexity, and disorder) of an Audio – Visual artwork. To design the algorithms of Autogenesis core system, the data from the composer’s physical and mental patterns while painting and drawing is utilized and a simulator model of his method is generated by automatic coding software. Therefore, what is depicted before the observer is the result of a generative system creating the terminal image and final sound autonomously in real-time. The viewer has the opportunity to manipulate the artwork and through participating in the formation process can graft into the artwork, alter the content and its creation logic, in addition to synchronizing with it a while.

To shed more light on how Autogenesis is working, first of all, we shall have a review of the general definition of Generative Art. A field of art in which the composer applies a system to produce artwork is called “Generative Art”. The system can be an integration of natural language, computer programming, or other related innovative mechanisms that are able to render a level of autonomy in part or in the whole fabrication process of the art work. Generative Art can be Hi-tech or non-high-tech, yet the core system needs to be designed in a way to be able to manage the terminal work autonomously. As a result, generative art refers to how the core system is working and the creation process of the artwork. Thus, to discover its link with its production reasons and understanding its content, initially, we must investigate system producer algorithms; because despite the fact that the core system is constantly hidden, it is the fundamental and constitutive part of the final art work.

Autogenesis central system is a complex system. To design the algorithms, an analysis was done on signals from hands physical behavior, joints movements, and brain waves frequencies of the artist while painting. The data is recorded by multiple sensors and then assimilated with another algorithm which is able to reconstruct the elements of the artist’s visual language and model their combination method. The end result of this research is a combination of patterns for generating information by which designing the final Data Simulator Engine for the genesis of the artwork becomes feasible. This Data Simulator Engine plays the role of the central system intelligence. By and large, complex systems consist of a series of parts and components interacting with their kind and other corresponding and contiguous components. These inner interactions make the system capable of organizing itself needless of an external controlling and managing agent. For that reason, such systems are also called “self-organizing”. To illustrate complex systems, the human brain can be used as an instance of a typical complex system as biologists describe it and psychoanalysts explain it in their research findings. Haunting cycle, animals populations within an ecosystem, genes outdoing one another yielding in species evolution, empires rising and falling, cultures forming and developing and the like all entail various parts and components such as cells, chromosomes, citizens, etc. which reach a consistent structure and shape over time by interacting with other homogenous and neighboring components.

Autogenesis core system is created by computer generative programming and just as in the brain example above, it has a large collection of components and interacts with each other every 30 seconds. Each of these components includes constituents and convert orders from central intelligence into particular operations and add the properties of the operations to the main network. This network consists of hundreds of components and because there are a considerable number of non-linear variables in each of these components, no identical pattern as the ones before is generated. The output operation of this dynamic system is a series of visual interminable signals turning into an image with a continuous and unrepeatable composition by a Real-time Rendering Engine. Autogenesis lives on like a group of organisms and just as Complex Adaptive Systems can react to the changes made by the observer in system components operations by converting into other systems while preserving its original structure.

The visual concept of this artwork is in the continuum of the artist’s previous works, an amalgam of painting, drawing, and sound design. Instead of being a constant image as one of “moment” and a possibility among artist’s endless mental possibilities, in this procedure, the artwork is a visual and audio improvisation synthesizing “visual-Sound” variable possibilities and generating a consecutive combination of them. In this situation, the artwork has no definite start point and nor can be an endpoint put to it. Not a moment before is recorded anywhere but in the viewer’s memory and neither a moment afterward is predictable. To that end, it can be stated that the artwork is more of a reflection of the artist’s thought mirroring on three curved walls than merely an objective piece of art. 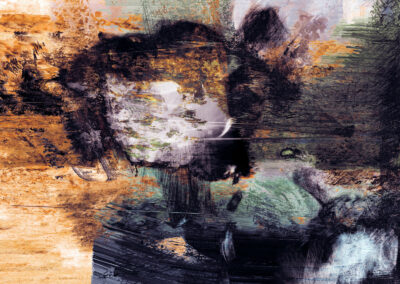 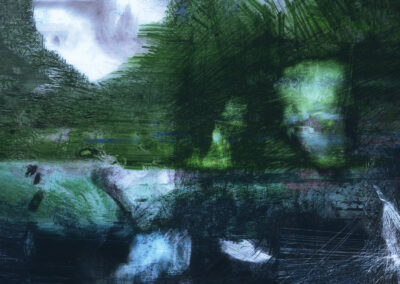 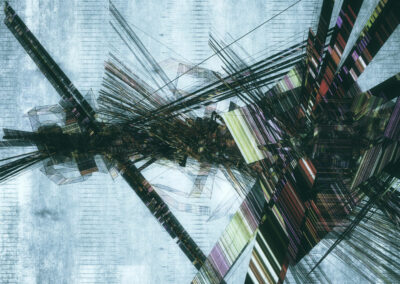 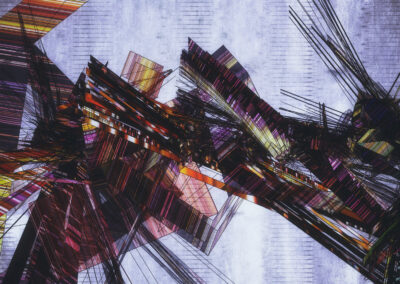 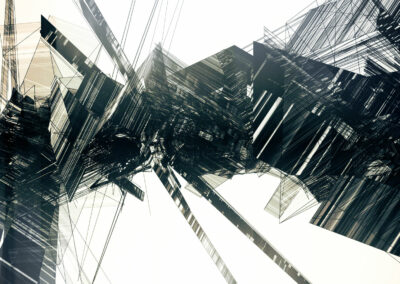 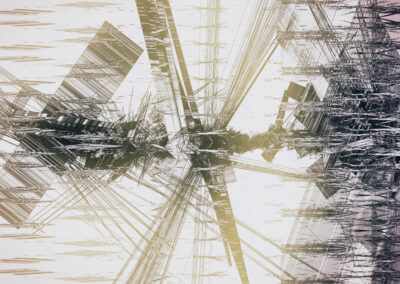 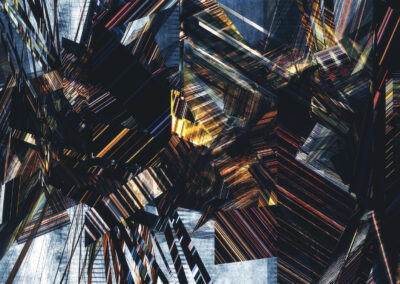 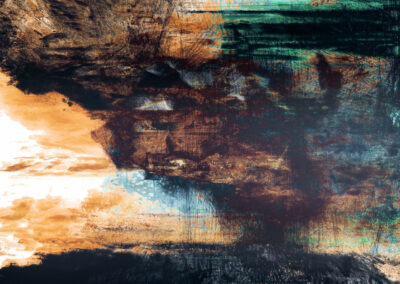